This past Saturday, I ran my 20th half marathon and broke 1:40 for the first time! I finished the Historic Drawbridge Half on the Eastern Shore of Maryland in 1:38:53, and I could not be more proud of myself.

As I’ve written previously, my goal was to break 1:40 in the half by the time I turn 40 next July, and I was training to do it at the Philadelphia Half Marathon on Nov. 23. This was actually the first time I ever followed a formal training plan for a half; when gearing up for a half marathon before, I just ran my normal 3-6 miles a few times a week, plus a long run of 10-12 miles on the weekends. That was always good enough for a solid 1:42-1:45 finish time, but I knew I had to kick it up a notch if I wanted to run a sub-1:40.

Enter Hal Higdon’s Advanced Half Marathon Training Program, which prescribed a 15K (9.3 mile) race for last weekend’s long run. 15Ks are hard to find, so I started searching for a 10 mile race when I found out about the inaugural Historic Drawbridge Half from Tilghman Island to St. Michael’s. The race, organized by TCR Event Management, raised money for volunteer fire companies in the area.

It looked like a great PR course — pancake flat and point to point, with no turns until, the race director joked, mile 13.05 when runners turned left into the Chesapeake Bay Maritime Museum where the finish line was. Only a few hundred runners were expected, so I knew I wasn’t going to get caught up in the crowds like I did in the Baltimore Half. AND there was a 1:40 pacer! Six days before the race, I decided to sign up and go for it. I’m obviously really glad that I did.

I can’t say enough about how well-organized the race was. Because it was the first year for the race, I expected a few logistical hiccups, but everything went so smoothly. I picked up my packet at the Maritime Museum Saturday morning and boarded a bus to the start line on Tilghman Island, exactly 13.1 miles away. There were no delays whatsoever with the bus, and we were all treated to an absolutely beautiful sunrise as we waited for the race to begin.

It was about 40 degrees outside and I wore running shorts, knee high VitalSox compression socks, my long-sleeved Boston race shirt and my Boston Celebration jacket. I was actually afraid of overheating in the jacket, but I felt pretty comfortable throughout the race. All in all, the weather was pretty ideal.

As it happened, I ran with the 1:40 group for the first few miles, then was feeling good so I pulled ahead. I knew it was risky and that I could blow up in the later miles, but nothing ventured, nothing gained, right?

Around miles 7 and 8 (I think), we started running into a headwind, and that was annoying. (Though I heard some other runners who live in the area say after the race that it was nothing like what they normally deal with.) One downside of this race is that it also got kind of boring after a while. We were running on the shoulder of the highway and there was zero spectator support. But to be honest, I wasn’t there to be wowed by the crowds; I’ll get that in Philly later this month. I was there for a PR.

Mile 10 was my slowest mile of the race. This is when the race got hard and I really had to rally mentally. I was recently asked what I think about when I am racing, and I didn’t have a good answer. But I realized during the race that I give myself pep talks. In this race, I kept telling myself I had trained for this and that it was time for me to finish the fight. (Seriously. I was really into the World Series this year and was cheering for the Nats, what can I say?)

I was really proud that I was able to hold a pace in the 7:30s that late in the race, because it was a huge struggle. After I passed the mile 12 marker, I told myself, “You could run a 9-minute mile right now and still meet your goal!” I ended up maintaining my pace pretty well, though.

I ran the last 0.1 in 59 seconds, saw 1:38 on the finish line clock and broke into a huge smile! (The finish line announcer called out my name and said I was “grinning from ear to ear.”) Once I stopped, I must have looked pretty spent, though, because a volunteer handed me a bottle of water, asked me if I was OK and if I needed to sit down. I felt pretty good — just pooped! But so happy!

I later found out that I was the third female finisher, which was cool, but I was way more excited about breaking 1:40.

I cashed in my beer tickets (finishers got two free beers!) while I waited for the awards ceremony to start. Turns out I was a VERY distant third place finisher — the first female ran a 1:21 and the second place female ran a 1:25. So freaking fast.

The awards ceremony was awesome for several reasons:

1. They played the Jurassic Park theme song. Who doesn’t love that?

2. As I walked up to the podium, the announcer said, “Here comes Allison Sauntry, sauntering up to get her award!” and that cracked me up.

3. Of course I had one of my freebie beers in my hand, so I had to set that down by the podium so I could accept my prize. Afterwards, the second place female (I think) handed me her two free beer tickets — I’m sure she assumed I would put them to good use. Had I not driven myself to the race, I certainly would have.

I won a $15 gift certificate to TriCycle and Run on St. Michael’s (the owners also own TCR Event Management), which I used to buy awesome Brooks cushioned socks. I also won a nice trophy. 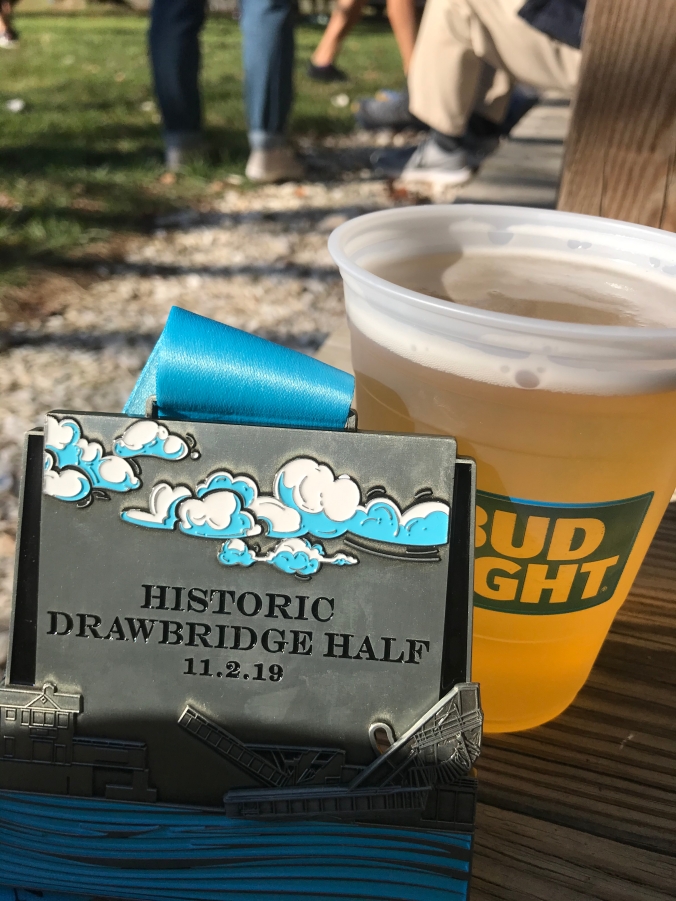 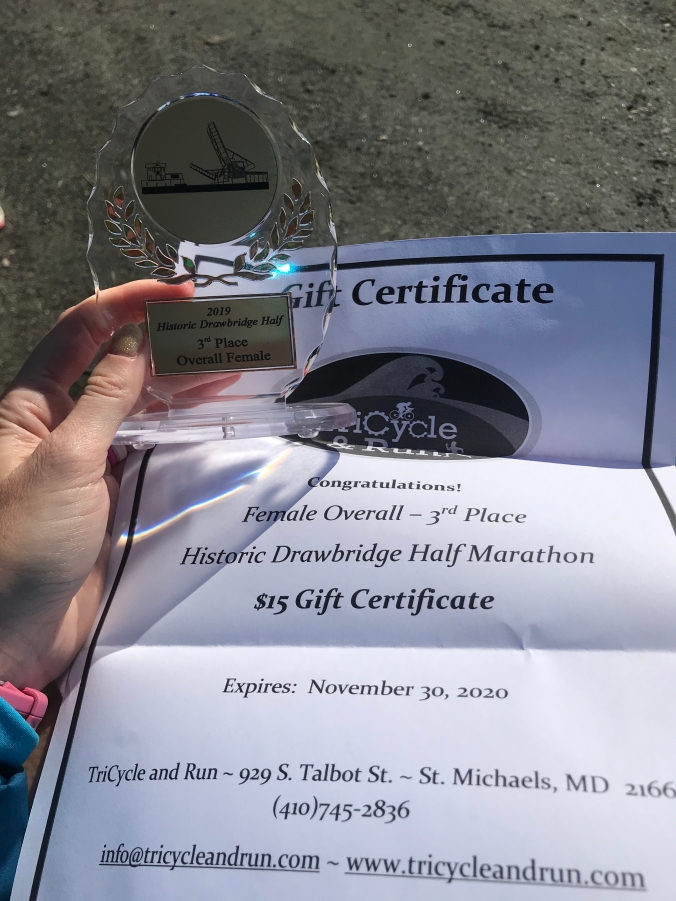 I heard that TCR put this race together to replace Across the Bay 10K, the annual race across the Chesapeake Bay Bridge that was put on hold this year due to bridge construction. As someone who prefers half marathons to 10Ks anyway, I am a huge fan. I would definitely recommend this race to other runners!

2 thoughts on “How I ran a sub-1:40 half marathon: A recap of the Historic Drawbridge Half”