It’s fitting that I kick off this blog by talking about the Annapolis Ten Mile Run, which I ran for the fifth time on Sunday.

The A10 is the first major race I ever did, and I believe it’s what made me a marathoner.
Back when I signed up for my first A10, on a whim, in 2013, I was a loyal gym-goer and a regular treadmill runner who was a little intimidated by the idea of running in a race with thousands of other runners. What if I totally sucked and embarrassed myself? But I decided to take a leap and run it anyway.

The day before the 2013 A10, I spent the day on my now-husband’s boat, carbo-loading with beer after beer. My sister partied so hard that she ended up in the Chesapeake Bay. Needless to say, when I woke up the next morning, I was in rough shape. But I powered through. I mean, I almost puked around mile 5, but I finished strong and wanted to sign up for the following year’s A10 almost immediately.

Lesson learned: No more than one beer (OK, maybe two!) before a long race! I’ve mostly stuck to that ….

In the years since, I’ve run countless 10-milers, a dozen half-marathons and three marathons. I like to say the 2013 A10 was my gateway drug. It made me fall in love with racing, and it made me proud to be a part of Annapolis’ wonderful running community.

The weather could not have been more perfect for the 2017 A10. And any runner knows what a difference the weather can make! A hot, humid day can really slow you down– and since the A10 is always the last weekend of August, well, there have been some muggy race days. On Sunday morning, the temperature was in the high 60s, the sun was shining and there was no humidity whatsoever (a rarity for a summer day in Maryland.)

The A10 follows the same route every year. Runners start at the Navy-Marine Corps Memorial Stadium and head through historic downtown Annapolis before running over Weems Creek and the Naval Academy Bridge. Then, you run miles 4.5-7.5 through the Pendennis Mount neighborhood before heading back toward the bridge (yes, you run over it twice. And yes, it’s steep and challenging!) Runners finish at the stadium.

The race is hilly, but I think the difficulty is what makes it appealing for a lot of runners. But aside from that, the course is so scenic. Running over the Naval Academy Bridge may kill your quads, but you’re rewarded with the most beautiful view at the top. The crowd support and the volunteers are just awesome, too. One surprise this year– a group of nuns in full habits who were out cheering on the runners around mile 9.5. Maybe they thought the runners needed some extra prayers!

The Annapolis Striders, the local group who organizes the race, also don’t skimp on the swag. Aside from the hoodies runners got as the finisher’s premium, we also got hats and these fantastic commemorative bottle openers: 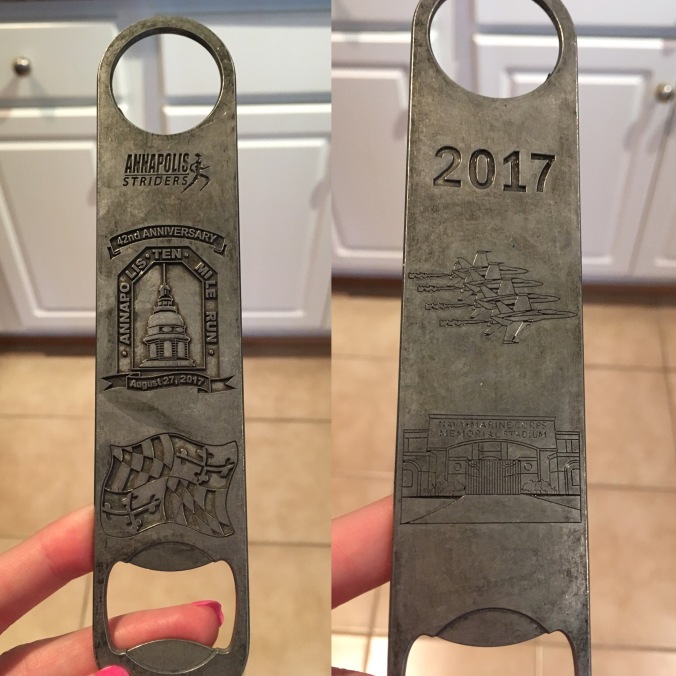 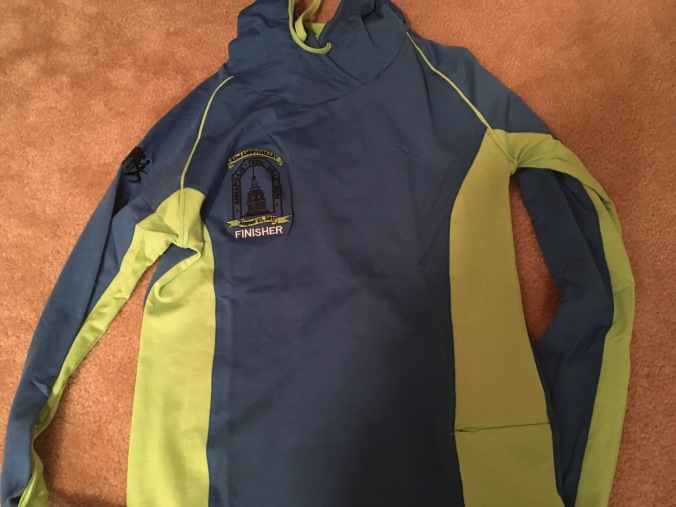 I finished the race in 1:15:37, my personal best for the 10-mile distance! I felt like the race went by SO fast, probably because I know the course so well at this point. I truly loved every mile.

My friend Kree and I. We both PR’d!

I’m actually running another 10-mile race in two weekends — the Bottle and Cork Ten-Miler in Dewey Beach, Del.– so we’ll see how my times compare. That’s a much flatter course, but the weather can be just as hot and sticky.

Thanks to the Annapolis Striders for putting on another quality A10! I’ll see you next year!

Speed workouts on the treadmill are as much of a mental workout as a physical one! Five #yasso800s tonight at around three minutes and 30 each, with a 400-meter jog in between, plus a warm up and cool down. Why three minutes and 30 seconds? According to @bartyasso, creator of the workout, these intervals are supposed to predict your marathon time. So if you can run sets of 800s in 3:30, you’re supposed to be able to run a marathon in three hours and 30 minutes. And this has worked for me in the past! When I ran my 3:35 marathon in 2017, I trained by running my Yassos in 3:35. So we’ll see what I can do this time around! #speedworkout #marathontraining
Easy Monday miles. In the winter, these are usually run on the treadmill after work since it’s dark outside and I don’t like to run alone in the dark if I don’t have to. But I had today off for #MLKDay so I got to enjoy a relaxing morning and a very chilly run outside. #nevermissamonday #marathontraining
Minus the wind, it’s a beautiful day! Three months until @coastaldelawarerunningfestival! #SundayRunday #marathontraining
This run felt really good even though it started sleeting on me toward the end. Marathon training has honestly made me appreciate winter because my body runs better in the cold than in the heat. (It also helps that Maryland winters are generally pretty mild!) #marathontraining #longrun
%d bloggers like this: