As cliche as it may be, I love fall. Where I live, it’s still pretty warm through October and even November, without the awful humidity that defines a Maryland summer (although this fall has felt awfully summer-like at times.) I love the colors on the trees. And I love anything that’s pumpkin-flavored. Bring me all the pumpkin spice lattes. If that makes me basic, then so be it!

So several months ago, when my friend Staci asked if I’d be interested in running the Great Pumpkin Run 5K, I was all in! Our other friend Cinnamon, who lives in Frederick where the race was held, also said she would run with us. Team Thrashing Pumpkins (Staci came up with the name) was born! At my husband’s urging, I signed up for the “Tough Pumpkin” option, meaning I would run the race with a pumpkin that weighed up to 10 pounds.

Cinnamon said afterwards that she was proud of herself for running the race because it was out of her comfort zone. I also felt like I stepped out of my comfort zone. I may run a lot of races, but I do not run while holding gourds or anything else, for that matter. Also, most of this race was on a trail, and I have very little experience trail running (although I do enjoy it.)

Even though temperatures topped out around 75 degrees the day before, the morning of the race was only in the 40s. Brrr. Fortunately, the race started at the very civilized time of 10 a.m., so it did warm up a little. I got there a little early so I could pick out my pumpkin, which I am guessing was around five pounds. It did not feel heavy when I picked it up, but I knew running with it was probably going to be a real pain.

Me after the race.

That was correct. I’ve been running 5Ks lately in the 21-22 minute range, and I knew I was never going to hit that pace with a pumpkin in my hands. And I also knew running on a trail would slow me down. So I tried not to think about my time too much and focused on just enjoying the experience.

And despite having to constantly move the pumpkin from arm to arm (while the stupidly long stem kept jabbing me), I really did enjoy the run! The race was held at a place called Crumland Farms, which was still all decked out with haunted Halloween attractions. The first three-quarters of a mile or so was on a gravel road, then runners headed back into the fields, where the terrain was muddy, uneven and littered with fallen corn stalks. The race organizers did a nice job of placing funny signs all along the course (“What’s the best place for a pumpkin? In a pie!” was my favorite. I happen to agree with that.)

I was proud of myself for passing quite a few men out there (though maybe they carried larger pumpkins; I really don’t know.) At one point, one guy yelled out to me, “You’re doing great! I’m here drooling on myself, and you don’t even look tired!” I’m glad I made it look easy, because, again, it was not!

I took a few brief walk breaks when I felt really pooped, then just tried to keep going as fast as I could. In the end, I crossed the finish line in just over 25 minutes. A volunteer told me that I was the first woman to cross the finish line carrying a pumpkin, but there was no awards ceremony, so I’m not totally sure. Still, I was happy with that time!

I need to add that I wasn’t the only one running with a little extra something — Staci is about three months pregnant, so she also was carrying a little pumpkin! Maybe with the early exposure, her little boy or girl will grow up to be a runner!

The swag for the race was on point. Runners got a hoodie with a pumpkin face on it — even though some people look down on those who wear race swag the day of the race, I totally did anyway — a big medal and a pumpkin to take home, even if you didn’t run the Tough Pumpkin. Tough Pumpkin runners got an extra medal. They also advertised apple cider, but it was apple juice (womp womp). I heard someone complaining about that.

This was also Staci’s third 5K race, and she summed it up accurately when she said every race is a new and different experience. That, to me, is the best and worst part of running! You never know quite what you are going to get every time you line up at the start of a race. But that’s what keeps it interesting! I’d definitely run this one again. 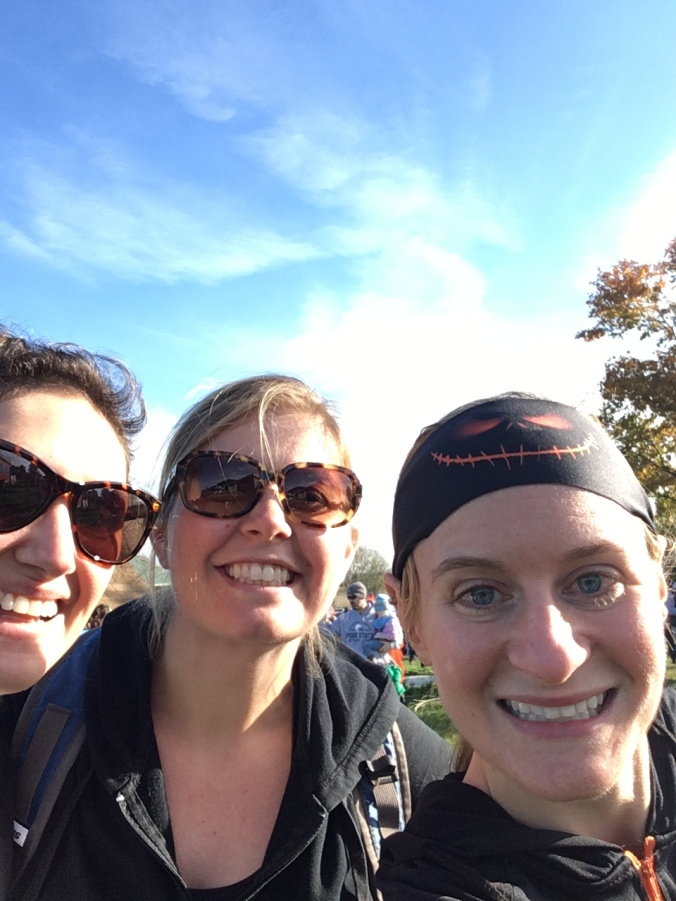